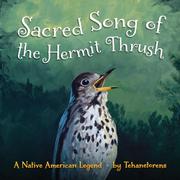 SACRED SONG OF THE HERMIT THRUSH

A Mohawk pourquoi tale explains how the hermit thrush and other birds got their songs.

“Long ago, the Birds had no songs,” the story opens; only humans sang. On a visit to Earth, the Good Spirit notices the silence until he hears chanting coming from “an Indian village,” depicted as several longhouses, smoke rising gently above them. The Good Spirit decides to give song to the birds, calling them together and telling them, “You are to fly as high as you can….The Bird that flies the highest will have the most beautiful song.” Hermit Thrush knows he has no chance against stronger flyers such as Akweks, the bald eagle, so he sneaks under the eagle’s feathers and rides up till even Akweks can fly no higher. Thus only Hermit Thrush is able to reach the Spirit World, from which he descends with the most beautiful song—and sudden, crushing shame at his trickery. “That is why Hermit Thrush is so shy.” Illustrator Fadden (Akwesasne Mohawk) is the grandson of the author, a teacher at the St. Regis Mohawk School who was adopted into the Mohawk Wolf Clan and given the name Tehanetorens. (He died in 2008.) The telling is stately, with a steady, oral cadence. The dappled paintings offer field guide–worthy images of the bird characters and depict the Good Spirit with brown skin and long, straight black hair.