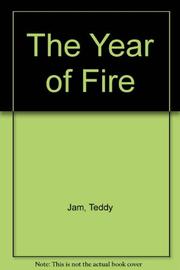 THE YEAR OF FIRE

Awed by the blazing fire Grandfather Howard uses to boil maple sap, the girl narrator asks whether he's ever seen a bigger one, and thus prompts an exciting tale of his youth. In 1919, a neighbor's brushfire ran wild, displacing wild creatures and engaging everyone, even Howard and his brother John, in an unsuccessful effort to make a fire break. John's eyebrows were scorched off, and, in the day before rain providentially put the fire out, the forest, school, and some houses burned, though Howard's house escaped. Finishing his story, Grandfather shows the girl some remaining evidence of the fire and tells her how the forest was renewed—and how the story, too, is renewed with telling. Jam's nicely wrought narrative includes a well- integrated Canadian setting and period details, as well as the fire's drama. Wallace's delicately precise pen-and-ink art has the subtlety of etching; soft added color evokes the pale light of early spring, contrasting with the fire's rosy glow. A fine early chapter book that could also be shared aloud. (Young reader/Picture book. 4-10)