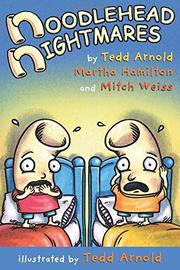 Anthropomorphic noodles worry and fret over a series of bedtimes and bad dreams.

Mac and Mac are two noodleheads, literally: they are noodle-shaped boys with nothing inside their heads. As might be expected, the two Macs are not particularly bright, and consequently they get into all types of goofy gaffes. The tubular tots initially decide to sleep outside because they hate making their beds, despite their mother’s bribe of a pie. Nighttime sounds scare them so much their legs tangle comically, and ultimately they go back inside. At least now they get pie. However, mischievous Meatball is also out for their confection—and gets it. Finally, one of the Macs loses his pillow and tries to compensate for its loss by bringing all sorts of odd objects—like a wooden chest and some food—into bed with him, with disastrous results. Funny nightmares punctuate each episode. Short chapters with large, brightly hued panels and spacious speech bubbles make this an easy choice for emerging readers. Fans of Arnold's previous work, particularly his Fly Guy series, will recognize his trademark artistic style and gravitate toward this. Opening notes in microscopic print explain the folk origins of each short chapter.