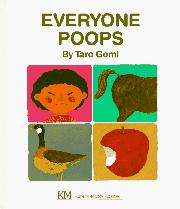 This straightforward, graphic book was published in Japan in 1978. Whether the US is ready for its unblinking look at a subject that naturally fascinates children and is basic to toilet training remains to be seen. ``An elephant makes a big poop. A mouse makes a tiny poop,'' begins Gomi, depicting animals, birds, fish, and humans in boldly stylized forms silhouetted against origami-paper colors; their feces are appropriately shaped blobs. There's a lot to know: different shapes, colors, and smells (not described), while some animals stop but ``Others do it on the move.'' A child heading for ``a special place'' introduces a nonjudgmental comparison of adults and tots on toilets and potties with a baby on a diaper. The book concludes with a seven- animal lineup viewed fore (``All living things eat, so...'') and aft (``Everyone poops''). Candid and sensible. (Picture book. 2- 5)