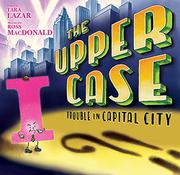 Lazar and MacDonald continue the relentless puns and fun with letters of 7 Ate 9 (2017), framed, like its predecessor, in the style of a mid-20th-century detective novel.

Private I, an actual letter I with little arms and legs, is dozing in his office when Question Mark and a rather shifty-looking Exclamation rush in to inform him that all the uppercase letters are missing, a surprising event in Capital City (geddit?!). No half-wit, I realizes that he is the “last capital letter standing” and resolves to take on the case. Chaos has erupted in the city, and random lowercase letters and punctuation run riot. I discovers that his favorite waitress, B has not shown up for work in the Café Uno—now known as “afé no” due to the dearth of uppercase letters. I takes the train out to Cursive Loop and finds the missing capitals all stuck up on a movie theater’s marquee, placed there by Exclamation, who, according to B, “promised to put us all in the movies.” Exclamation’s explanation is a subtle dig at overuse of this symbol: As he says, “Capital letters are always calling me…YES, HA, OMG!” Exclamation is arrested by the Grammar Police and put away for a “short sentence.” MacDonald’s illustrations, with classic typesets and hints of the Manhattan skyline, perfectly capture the retro mood and comedy of the concept.