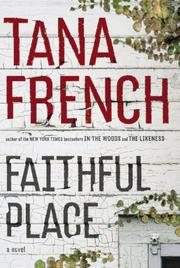 An Irish undercover cop delves into his working-class past.

When Frank Mackey left Faithful Place more than 20 years ago, he never imagined returning. Of course, he thought he’d be leaving with his childhood sweetheart Rosie Daly. When Rosie failed to show up at their meeting spot that fateful night, Frank was broken-hearted but decided to go it alone. He’s moved on and hasn’t looked back—until he receives an urgent call from his sister Jackie, demanding that he return to his childhood home. She’s got the one thing in the world that could make him come back: information about Rosie, whose suitcase has been found in a vacant house. This new intelligence throws mysterious shadows on Frank’s theories about Rosie’s fate. Suddenly, what was once buried history starts coming to light, and Frank isn’t quite prepared for the twists his life begins to take. Not only does everything seem to tie into his family of origin, but menacing fingers seem to be reaching out for his young daughter Holly. If only Frank’s position as an undercover cop would give him some insight into the case. Instead, Scorcher, the lead investigator, has an eye out for Frank’s interference and keeps him at an increasing distance as the investigation heats up.

Though French (The Likeness, 2009, etc.) plies readers with dark and stormy clichés, the charming narrative will leave readers begging for a sequel.