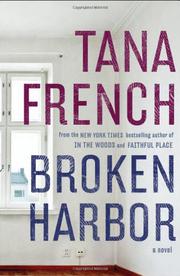 A mystery that is perfectly in tune with the times, as the ravages of the recession and the reach of the Internet complicate a murder that defies easy explanation within a seemingly loving household.

The Irish author continues to distinguish herself with this fourth novel, marked by psychological acuteness and thematic depth. As has previously been the case, a supporting character from a prior work (Faithful Place, 2010, her third and best) takes center stage, as Mick “Scorcher” Kennedy attempts to penetrate the mystery of what transpired during a night that left a husband and two children dead and a wife barely clinging to life, with injuries that couldn’t have been self-inflicted. Or could they? This is the most claustrophobic of French’s novels, because the secrets seemingly lie within that household and with those who were either murdered or attacked within it. The setting is an upscale property development at what had once been Broken Harbor, where Kennedy’s family had itself suffered a fatal trauma decades earlier. The property development has been left unfinished due to the economic downturn, which had also cost Patrick Spain his job. He and his wife, Jenny, had done their best to keep up appearances, with their marriage seemingly in harmony. Then came the attack that left Patrick and their two children dead and Jenny in intensive care. The investigative net cast by Kennedy and his younger partner encompasses Jenny’s sister and some of their longtime friends, but the focus remains on the insular family. Had Patrick gone insane? Had Jenny? Was this a horrific murder-suicide or had someone targeted a family that had no apparent enemies? Says Scorcher, “In every way there is, murder is chaos. Our job is simple, when you get down to it: we stand against that, for order.” Yet Scorcher’s own sanity, or at least his rigid notions of right and wrong, will fall into question in a novel that turns the conventional notions of criminals and victims topsy-turvy.

The novel rewards the reader’s patience: There are complications, deliberations and a riveting resolution.