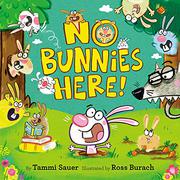 Welcome to Bunnyville, land of a thousand (and no) bunnies!

With the Hoppy Day Parade fast approaching, all is well in Bunnyville—until a lone wolf with a hungry look approaches. Desperate not to become lupine lunch, a particularly plucky bunny devises increasingly zany means of convincing Wolf that there are, in fact, no bunnies to be found anywhere, such as by dressing up as a unicorn, popping a lampshade onto another bunny, and pretending another bunny is a puppy. The mission is consistently complicated by the myriad bunnies who hop, pop, and parade into view. Wolf, amusingly, is a creature of few words and is neither fooled nor deterred. Wolf really, really wants to find a bunny—but not for the reasons anyone, least of all the protagonist bunny, suspects. With each new bunny comes a fresh laugh, bolstered by Burach's delightfully expressive characters and bright, busy page layouts. Sauer's text is sparse but energetic; the lead bunny narrates with all the bumbling charm of an overeager salesperson, the loquaciousness playing hilariously off Wolf's pointed gestures, reproachful eyebrows, and glum charts. As humorous as the story is, it's made ultimately poignant with the age-old message to never judge a book by its cover lest one drive off an unlikely friend. (This book was reviewed digitally.)