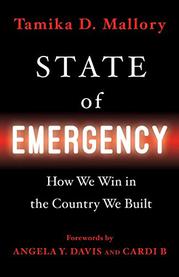 How We Win in the Country We Built

by Tamika D. Mallory with Ashley A. Coleman

Activist and organizer Mallory sounds an alarm against complacency now that a new administration is in the White House.

American history has been full of terrible moments for Black people, but one of particularly pressing importance happened recently. “To wake up on January 6, 2021,” writes the author, “to see a noose hanging in front of the United States Capitol while domestic terrorists breached the complex where our congressional leaders met to legislate, was paralyzing.” Paralyzing but not unexpected: Mallory’s next thought was, “Wow, they finally did it.” The Trump administration, whose leader fomented the revolt, is gone, but the enemies of Black progress remain. Against that, writes the author, “it is not enough to be nonracist.” Black activists and their White allies—who are welcome if they are “careful not to try to own the fight”—must commit to being anti-racist, to constantly combat racism and its exponents. Mallory delivers a series of rules that one wishes were ironic: “Don’t talk back,” reads one, since the consequence is that “You will be deemed dangerous,” while another counsels not to wear a hoodie. Because “my undiluted Blackness is worth fighting for,” the author urges a well-organized movement of resistance that involves, among other tenets, stopping to record every encounter of Black persons and the police, taking down names and badge numbers and filing complaints. Despite her well-thought-through program, which concludes with the rule “Be unapologetic about your Blackness until they respect it,” Mallory calls herself a contributor to and not a leader of the Black Lives Matter movement (she also co-founded the Women’s March on Washington), a movement whose necessity remains self-evident even with the new Biden-Harris presidency: “They must turn over the soil in order to grow a new political landscape for us all.” This is the first book from the Black Privilege imprint, led by radio and TV personality Charlamagne Tha God.

An urgent call for racial justice that demands attention, discussion, and action.