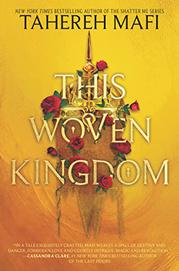 Ever since the fall of Iblees, a Jinn and being of fire who rebelled against God’s creation of humans, all Jinn-kind have been forsaken by a universe that bore witness to the fall of their civilization and humanity’s inheritance of the world. Though the kingdom of Ardunia’s Fire Accords established a tenuous peace between the two races, ingrained hatred for those associated with the devil resulted in the exploitation of Jinn and curtailing of their abilities. Alizeh, a Jinn working as a servant in a noble house, hopes for a reprieve from her state of destitution, grief over her parents’ deaths, and flight from constant persecution. Because in addition to being Jinn, ice also runs through Alizeh’s blood, marking her as the heir to a lost kingdom whose power will lead to the unification and liberation of her people. When Prince Kamran discovers Alizeh, he cannot deny his attraction to her, even as her very existence threatens his grandfather, the king; the continuity of Ardunia; and perhaps humanity itself. Alizeh agonizes over her own feelings for the prince and the implications of the prophecy while she navigates between those who see her as an enemy and those who wish to use her. Richly textured, descriptive prose coupled with agonizing romance combine in this fantastical epic.