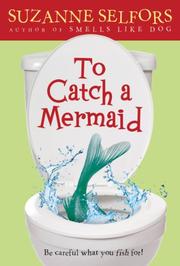 TO CATCH A MERMAID

In this humorous riff on “The Boy Who Cried Wolf,” Selfors tells the story of 12-year-old Boom Broom and his hypochondriac sister Mertyle. Viking housekeeper Halvor only serves fish, so Boom brings home a bucketful for supper. Inside the pail Mertyle finds a badly behaved creature that they decide must be a merbaby. As time goes by, Mertyle gets Ick disease, the traditional, fatal punishment meted out by mermen whose children are taken by humans. Boom’s dad is no help; he’s unable to leave the house because he hopes his wife will return home—a tornado took her away prior to the book’s opening. Reminiscent of Dahl, Ibbotson and Snicket, Selfors incorporates lots of silliness with some elements of danger. While Boom’s mum never does return, Mertyle’s illness is healed after Halvor’s Viking Society and her family work together to return the merbaby to her parents. It’s often a bit twee, but there are some humorous moments. Best suited for reluctant readers who like silly fantasies. (Fiction. 8-12)