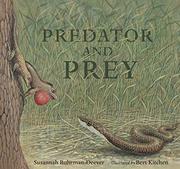 A Conversation in Verse

Predator and prey face off in a battle of poems.

The dramatic encounters of predators and their prey, portrayed here in poetry and watercolor-and-gouache illustrations, do not always result in the death of the prey. Sometimes the stalked creatures fight back! Ground squirrels wave their tails, telling rattlesnakes the element of surprise has been lost. Tiger moths jam the big brown bats’ echolocation. A female Pennsylvania firefly acts the “femme fatale” when it tricks male big dipper fireflies and eats them—dinner instead of love! Such encounters are effectively depicted in verse and art, fine bookmaking complementing both. Nicely paced and rhythmic poetry, usually in the first person, colorfully brings to life each creature’s character and modus operandi. “I am patient. / I am primed. / I am coiled muscle, / expertly designed. / I am loaded spring / I am … / LIGHTNING!” says the Pacific rattlesnake. The rhythms evoke the march of the ant armies, the “vocal stealth” of chickadees, the boasting of the feisty crested anole lizard: “ ’Cuz I’m buff! / And I’m tough! / And you know I’ve got the stuff!” Text boxes supplement the poems and illustrations with information about the animals, and clever gatefolds in some spreads allow Kitchen’s sumptuous illustrations full command by tucking the text inside the folds.

An effective presentation of science through poetry, art, and stellar bookmaking.