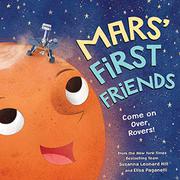 Come on Over, Rovers!

In the spirit of their Moon’s First Friends: How the Moon Met the Astronauts From Apollo 11 (2019), Hill and Paganelli send a lonely Mars to his father, the Sun, for a pet. Denied (Pluto is the whole family’s pet), the planet goes from one anthropomorphic solar sibling to another on a seemingly fruitless quest for companionship. This culminates in the violent and exciting arrival of two speedy “little spacecrafts” sent from Earth as a family gift. Fondly watching the puppylike rovers trundle about his orange surface collecting rocks, playing in a sandstorm, and snuggling together for the night, Mars both promises to make them a good home and looks forward to the arrival of future “pets.” Smiling faces on all the planets, moons, and rovers in view—which are otherwise rendered with reasonable accuracy—give the outing a cozy tone overall. Better yet, though the rovers’ missions get barely a nod in the main narrative, a substantial epilogue fills in the blanks with basic facts about the solar system in general and Mars in particular, plus profiles of NASA and the entire company of Mars rovers from 1997’s Sojourner to 2012’s still-active Curiosity (with a note about an unnamed, upcoming “new pet”).

A warm invitation to visitors wheeled or in boots: “Come on over, rovers!” (Informational picture book. 6-9)