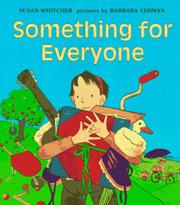 A good-natured rant against materialism. When Great-aunt Elsie Applebaum drops out of society, she leaves her possessions to a swarm of greedy relatives. No one is satisfied with any part of the legacy, until ``little Tilda-next-door'' gets hold of it. From broad hints dropped in the first few pages, readers will know that Tilda is the only one who understands Elsie and won't be surprised when she fashions the items into a magic traveling machine. Following a series of adventures, Tilda finds her own place in the sun, right next to Great-aunt Elsie. Whitcher (Real Mummies Don't Bleed, 1993, etc.) has poetic sensibility—``The guitar strings thrummed from the rush of flying,'' ``Fingers of fog reached and clung''—that she never overuses. At first the rather staid, even ordinary illustrations seem at odds with the text's rebellious message; soon they give rise to some grand images, especially in the fantastic latter-half of the book. A reunion of the creators of Moonfall (1993, not reviewed), this book builds to a satisfying close. (Picture book. 5-8)