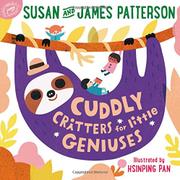 From the Big Words for Little Geniuses series

Tired of horsies, duckies, and kitties? Meet the roseate spoonbill, the Irrawaddy dolphin, the gerenuk, and 45 like specimens of exotic wildlife.

Continuing the vocabulary-building they began in Big Words for Little Geniuses (2017), the Pattersons focus here on creatures with names that beg to be sounded out and relished—from the “silly-looking aye-aye” to the “adorable” dumbo octopus, axolotl, and jerboa. The animals are grouped into the rough categories “Flyers,” “Swimmers,” and “Crawlers,” and each is glossed with a few brief, crowd-pleasing facts or comments. The toucan “sounds like a cross between a pig and a frog!” The chinchilla “might pee on you if it gets scared. It also likes to eat its own poop.” Pan supplies stylized portraits in illustrations that are all bright colors and blobby shapes, as cheery as Matisse paper collages. The beginning and ending are abrupt, the stylization sometimes goes a bit too far (even veteran naturalists will have trouble puzzling out the Sunda colugo), and some selections, such as the angel shark and the blue poison dart frog, don’t seem especially “cuddly.” Still this parade will give the next generation of Jane Goodalls and Roger Tory Petersons a leg up on some of the wild kingdom’s more colorful (and sonorously named) residents.

Cute to occasionally cutesy—but not condescending.