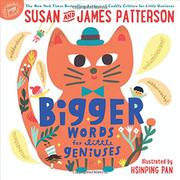 The creators of Big Words for Little Geniuses (2017) and Cuddly Critters for Little Geniuses (2018) follow up with another ABC of extravagant expressions. It begins with “ailurophile” (“How furry sweet!” Puns, yet), ends with “zoanthropy,” and in between highlights “bioluminescent,” growls at a grouchy “gnashnab,” and collects a “knickknackatory” of like locutions. A list of 14 additional words is appended in a second, partial alphabet. Each entry comes with a phonetic version, a one- or two-sentence verbal definition, and, from Pan, a visual one with a big letter and very simple, broadly brushed figures. Lending an ear to aural pleasures, the authors borrow from German to include “fünfundfünfzig” in the main list and add a separate list of a dozen more words at the end likewise deemed sheer fun to say. Will any of these rare, generally polysyllabic leviathans find their way into idiolects or casual conversations? Unlikely, alas—but sounding them out and realizing that even the silliest have at least putative meanings sheds liminal light on language’s glittering word hoards.

Only gnashnabs would cavil at this eximious display of lexicographical largesse.