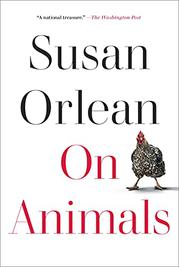 The beloved author gathers a wide-ranging selection of pieces about animals.

“Animals have always been my style,” writes Orlean at the beginning of her latest delightful book, a collection of articles that originally appeared in “slightly modified form” in the Atlantic, Smithsonian, and the New Yorker, where she has been a staff writer since 1992. The variety on display is especially pleasing. Some essays are classic New Yorkerprofiles: Who knew that tigers, near extinction in the wild, are common household pets? There are at least 15,000 in the U.S. Her subject, a New Jersey woman, keeps several dozen and has been fighting successful court battles over them for decades. Lions are not near extinction, however; in fact, there are too many. Even in Africa, far more live in captivity or on reserves than in the wild, and readers may be shocked at their fate. Cubs are cute, so animal parks profit by allowing visitors to play with them. With reserves at capacity, cubs who mature may end up shot in trophy hunts or in stalls on breeding farms to produce more cubs. In “The Rabbit Outbreak,” Orlean writes about how rabbit meat was an American staple until replaced by beef and chicken after World War II, whereupon rabbit pet ownership surged. They are now “the third-most-popular pet in the country, ranking just behind dogs and cats.” Readers may be aware of the kerfuffle following the hit movie Free Willythat led to a massive campaign to return the film’s killer whale to the wild, and Orlean delivers a fascinating, if unedifying account. The author handles dogs like a virtuoso, with 10 hilarious pages on the wacky, expensive, but sometimes profitable life of a champion show dog. Among America’s 65 million pet dogs (according to a 2003 report), 10 million go astray every year, and about half are recovered. Orlean engagingly recounts a lost-dog search of epic proportions.

Another winner featuring the author’s trademark blend of meticulous research and scintillating writing.