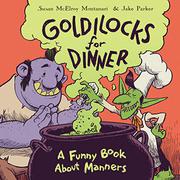 A Funny Book About Manners

Mind your manners? Don’t mind if they do!

Having lost the ickiness contest in Who’s the Grossest of Them All? (2016), buddies Troll and Goblin have now abandoned entirely any desire to be disgusting themselves. Instead, they’ve turned their attention toward children, those “wretched” little beasts that they consider uniformly rude. Concocting a plan, the two decide to find the rudest child and have it for dinner. Turns out, this is more difficult than planned. Mistress Mary is just contrary, and Simple Simon merely gross. However, when the two hear about Goldilocks, they know they’ve found the kid they want for dinner. The twist at the end is that old chestnut in which the two seeming baddies want to have Goldilocks over for dinner so they can teach her good table manners (never mind that of all her breaches of etiquette, Goldilocks’ behavior during mealtime is hardly her greatest sin). The cartoony illustrations are rendered in ink with digital colors, and the incorporation of Sunday-funnies–style Ben Day dots into them is certainly striking. Caregivers misled by the subtitle may expect more manners tutelage than the book delivers. As a story of baddies thwarted, but not for the reasons you’d expect, it’s passable. As a manners book, don’t expect the Emily Post seal of approval. All humans in the story are pictured as white.

Mannered, yes. Containing advice on manners? Not so much.