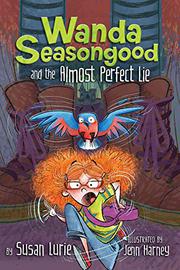 From the Wanda Seasongood series, volume 2

A misplaced sibling means more fantastical adventures for a girl just trying to do her best.

Newly 11-year-old Wanda is about to set off on another adventure into the Scary Wood, accompanied by her talking bluebird companion who fancies himself to be his namesake—Voltaire. Now that a spell has been lifted from her family, as recounted in Wanda Seasongood and the Mostly True Secret (2020), it’s revealed that she has an older sister named Wren, who’s being held captive by the evil witch Raymunda. Wanda was so small when Wren was taken that she doesn’t remember her, but that won’t stop Wanda from going to save her despite her parents’ blunt lack of faith in her capabilities. As before, “there’s no right or wrong way” in the Wood, since “they all lead to trouble.” Wanda and Voltaire face off against trolls, a giant, a banshee, fairies, a pooka, and the returning Royal Prince Frog, who pesters likely contenders for a kiss, all while avoiding Raymunda and her equally witchy sons. Structured much like Wanda’s first adventure, the episodic story features all the standard tropes of a fairy tale for modern sentimentalities. Lurie’s narrative is heavy-handed at times, emphasizing the ridiculousness of said tropes for comedic effect. Fairies and the witch family are multiracial while Wanda’s family presents white, with Wanda sporting bushy red hair, freckles, and brown glasses.

A zany, over-the-top romp in the woods.