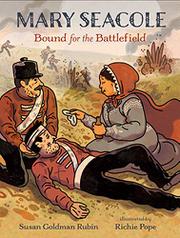 Bound for the Battlefield

A detailed biography of a Jamaican woman who nursed soldiers in battle during the Crimean War.

Born in 1805 to a Creole (mixed-race) mother and a Scottish father, Seacole spent her childhood studying her mother’s medicinal practices and relishing her father’s war stories, hoping to one day travel herself. Her life became a combination of both. After her husband and mother died, Seacole took charge of the boardinghouse her mother left behind. When soldiers arrived sick with cholera, she would nurse them. Wherever she went, her medical knowledge was needed: an outbreak of cholera in Panama when she visited her brother; yellow fever outbreaks in Kingston. Finally, she went to London to volunteer as an army nurse in the Crimean War (the basics of the war are described for context). She was turned away due to her color, but she packed her treatments and headed to Turkey on her own. Florence Nightingale turned her away too, but Seacole knew her services were needed, and she went elsewhere, ultimately spending years treating soldiers on the battlefield. She became famous when a British war journalist praised her, and she eventually wrote a book about her experiences—but she returned to England in debt. Her service was at last acknowledged and her finances saved by contributions made by the English people and the crown. This slim book features full-page, color illustrations throughout, and the text quotes Seacole’s memoir to give the narrative the flavor of her era, personality, and experiences. It is a riveting story that deserves attention.

Both biography and subject are unique and inspiring.