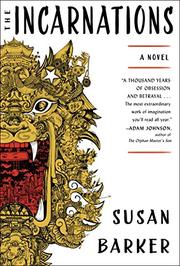 A letter from a mysterious stalker upends the life of a Beijing taxi driver in Barker’s (The Orientalist and the Ghost, 2009, etc.) stunning epic, which spans a thousand years of Chinese history and six lifetimes of betrayal.

Wang Jun, husband of Yida, father of Echo, is driving down Workers Stadium Road when the first note falls from the visor of his cab. “I watch you most days,” it reads. It is taunting in its anonymity: “Who are you? you must be wondering. I am your soulmate, your old friend, and I have come back to this city of sixteen million in search of you.” And so begins Wang’s unraveling. In the present, it’s 2008. The city is preparing for the impending Olympics, and Wang—distanced from his troubled family, mostly recovered from the nervous breakdown of his college years—has carved out something like contentment for himself: a beautiful wife, a beloved child, a job, if not the one he once seemed destined for. But this is not Wang’s first or only life, the letters explain. There have been other incarnations. He and the “soulmate” have, in fact, been intimately connected for more than a thousand years, from the Tang Dynasty to the Opium War to the Cultural Revolution. They have been father and illegitimate daughter, the product of incest and fellow courtesans to the sadistic Emperor Jiajing; schoolmates at the Anti-Capitalist School for Revolutionary Girls and Jurchen boys, enslaved by the Mongols. Moving between Wang’s many pasts, all of them thrilling, gruesome, and tragic, and his increasingly desperate present, Barker’s historical tour de force is simultaneously sweeping and precise. It would be easy for the novel to teeter into overwrought melodrama; instead, Barker’s psychologically nuanced characters and sharp wit turn the bleakness and the gore into something seriously moving.

Effortlessly blends the past with the present, dark humor with profound sadness. A deeply human masterpiece.