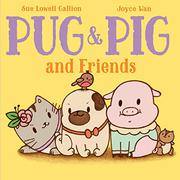 From the Pug & Pig series

Now that Pug and Pig are fast friends, it’s time to meet some of their other buddies.

In the yard of their large Victorian house, dog and pig explore and run in circles with their friends Robin and Squirrel (with the latter’s prominent stripe, Chipmunk might be a better name, though their tail is fluffy). Cat just watches these shenanigans, waiting for an opportunity to engage in her own fun: surprising Pug. Cat and Pig find this activity wildly amusing, but the other three “do not like surprises at all.” When a thunderstorm suddenly strikes, it’s every friend for themselves. Squirrel and Robin go to their tree nests, Pug and Pig run to their (dog)“house” (which looks like a small version of their Victorian “home”), and Cat, frightened by lightning, gets stuck in a tree. There she remains until clever Pug lures her down with her favorite pastime, which this time amuses all five friends. Not much happens in this outing, and there’s little to no character growth, making this closer in feel to the duo’s first meeting (Pug Meets Pig, 2016) than to their shining Halloween moment (Pug & Pig Trick-or-Treat, 2017). The simply drawn cartoon scenes with few details and blocks of color keep the focus on the expressive faces and body language of the friends. Cat’s adorned with a collar and flower atop her head, Pig sports a blue shirt with a yellow ruffled collar, and Pug has a bow tie. (This book was reviewed digitally.)