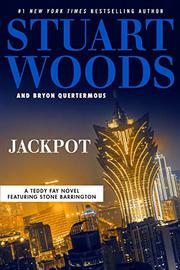 Centurion Studios president Ben Bacchetti and his partner, director Peter Barrington, see no reason why their visit to the Macau Film Festival should be all business. They’re dismayed when their visit to a baccarat table at the Golden Desert Casino and Resort is used as material for a deep-fake video that seems to show them cheating. The video, which has evidently been engineered by Bing-Wen “Bingo” Jo, bids fair drag them into the iron grip of fearsome media/casino mogul Arrow Donaldson, for whom Bingo works off the books on matters concerning digital technology and violence. But Centurion producer Teddy, who’s every bit the equal of Bingo and Donaldson fixer Zhou "Ziggy" Peng put together, is on the case. His improbable sometime partners are Li Feng, the heiress and CFO of QuiTel who’s fighting to keep her company exempt from the U.S. blacklist of competing Chinese telecom corporations suspected of spying, and Millie Martindale, a CIA administrator who’s a lot more resourceful than most administrators you’ll ever meet. The first partnership between Woods and Quertermous is full of casino underlings, biddable cops, fake shootings, and doubles living and dead. But the plot never thickens, and readers confident that Teddy will live to fight, pressure, cheat, and kill another day may be indifferent to the fate of the nefarious forces arrayed against him.

The first of Woods’ many collaborations to be unquestionably inferior to his solo performances.