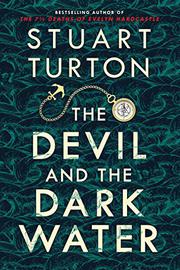 THE DEVIL AND THE DARK WATER

After an outbreak of ghastly events aboard the Saardam, a merchant vessel returning from the East Indies to Amsterdam in 1634, fear spreads that an evil spirit is responsible.

Before the ship's departure, a leper issued a stark warning about the "merciless ruin" that awaited it—and then burst into flames. Only prisoner Sammy Pipps, an alleged British spy with uncanny powers of deduction, took the threat seriously. Soon enough at sea, on a vessel populated by "murderers, cutpurses and malcontents," throats are slit, bodies are stashed, and dark secrets are exposed. Ultimately, a monster storm upends the Saardam and destroys two other ships in the fleet. Amid the evil doings, human decency is largely limited to Sammy's bodyguard, Arent Hayes, a physically imposing specimen with a kind soul and a "poisoned" past, and healer Sara Wessel, abused wife of soulless Governor General Jan Haan, who happens to be Arent's uncle. With their congenial Holmes and Watson act, Sammy and Arent seem on track to emerge as the heroes of this perpetually revealing tale. But Turton, who brings a pointed social conscience to bear in his commentary on the ill treatment of women and the exploitation of the lower class, has something else in mind. With all its characters, hidden identities, and backstories, this epic sometimes sags. As one character declares, "There are too many damn secrets on this ship, and I swear all of them are marching toward him with swords in their hands." But Turton, whose brain-twisting first novel, The 7½ Deaths of Evelyn Hardcastle (2018), posed knotty challenges for readers, has a colorful tale to tell and does so in highly entertaining fashion.

A devilish sea saga that never runs out of cutthroat conspiracies.