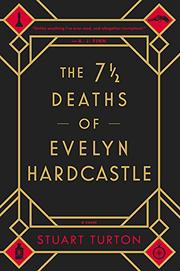 THE 7½ DEATHS OF EVELYN HARDCASTLE

In this dizzying literary puzzle, the hapless protagonist is doomed to relive the same day over and over unless he can solve a murder at a masquerade ball.

The narrator, Aiden Bishop, wakes up in a forest outside Blackheath House, “a sprawling Georgian manor house,” not knowing who or where he is—or why he's screaming the name Anna. A man in a beaked plague-doctor mask brings him up to speed: For eight days, Aiden will wake up in the body of a different witness to the shooting of young beauty Evelyn Hardcastle. If at the end of that extended week, during which Aiden will remember all that occurs, he fails to identify the killer and break the bizarre murder cycle, he will have his memory wiped and be forced to start from the beginning. "It's like I've been asked to dig a hole with a shovel made of sparrows," Aiden moans. To be real or not to be real, that is the question for Aiden, who struggles after his own identity while being "hosted" by individuals who include the lord of the manor, a doctor, and a butler. Borrowing liberally from such cultural milestones as Groundhog Day, Quantum Leap, and Eyes Wide Shut—and, of course, the stories of Agatha Christie—the book has a built-in audience. It's a fiendishly clever and amusing novel with explosive surprises, though in the absence of genuine feeling, it tends to keep its audience at arm's length.

Turton's debut is a brainy, action-filled sendup of the classic mystery, though readers may be hard-pressed to keep up with all its keenly calibrated twists and turns for more than 400 pages.