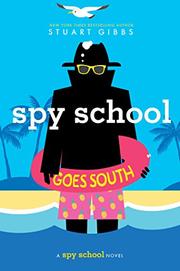 From the Spy School series, volume 6

The spy kids return for another Spy School adventure.

By now, the students at the CIA’s Academy of Espionage have had multiple exciting encounters with the villainous organization that calls itself SPYDER. The CIA is keen to take advantage of an offer made to them by disgraced ex-spy Murray Hill, a captured SPYDER teen agent. Narrator and agent Ben Ripley, 13, and his partner, Erica Hale, 15, are the only agents Murray will lead to SPYDER’s secret headquarters, so the duo reluctantly follows the traitor’s lead while their fellow students Mike Brezinski and Zoe Zibbell stow away. Things go south quickly, and soon the group is stuck in a strange land with no backup. At this point in the series fans know what they’re getting, and Gibbs doesn’t disappoint. The dialogue crackles, the schemes are clever, and the plotting is tight and efficient. Gibbs doesn’t divulge any of the character’s ethnicities, leaving room for interpretation in a key moment that is gracefully organic to the narrative. The book’s finale leaves room for more adventures, and fans’ interest in the series will be just as rabid after this fast-paced, good-humored entry.

Another solid adventure that doesn’t reinvent the wheel but spins it quite well.