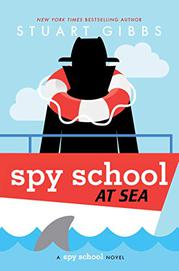 From the Spy School series, volume 9

In a new caper, the Spy School team thwarts a fiendish scheme on the high seas.

A fresh chance to catch up to world-class gourmand and perennial foe Murray Hill plants dogged CIA junior agent Ben Ripley and associates—including markedly more competent classmate Erica Hale and her equally able mom, Catherine—aboard the Emperor of the Seas, the world’s largest cruise ship, for a fresh round of ridiculously destructive chases, startling twists, and repeated attempts on the hapless young spy’s life that are somehow always averted in the nick of time. Along with adding a grandfatherly, eco-conscious Costa Rican drug lord to the supporting cast, Gibbs flirts with stereotypes by trotting in, among the few characters who don’t at least present as White, a Chinese teen given to muddling her English idioms, her bling-loving mother, and a chipper shipboard event manager of Australian Indigenous descent. Still, the revved-up plot will leave readers as breathless as Ben is in the wake of a final, unexpected turn in his relationship with Erica. Finally, finally nabbing the slobby supervillain (at least for now) as well as saving the lives of hundreds of oblivious, hard-partying onboard tourists must count for something.

The series keeps cruising along…though iffy casting may be an early sign that it’s losing steam.