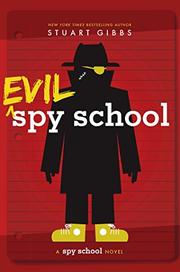 From the Spy School series, volume 3

When a training exercise at the CIA’s Academy of Espionage takes a wrong turn and 13-year-old Ben accidentally blows up the principal’s office, he’s thrown out of school faster than readers can say, “undercover.” But before Ben even has the chance to settle back into civilian life, his nemesis at SPYDER, a top-secret organization of evildoers, offers him a chance to get back in the game—but this time, he’ll be playing for the bad guys. Is this all part of a secret CIA plan to infiltrate SPYDER? Or is Ben running a one-man undercover operation? Gibbs (Spy Camp, 2013, etc.) leaves readers (and Ben!) wondering a bit too long, but fans of the series will still enjoy the ride. Ben is as witty and entertaining a protagonist as ever, and readers will get a kick out of his new “friends” at evil-spy school. Ashley Sparks, a bitter ex-gymnast robbed of her chance for Olympic gold but carrying a torch for Ben, is a particularly welcome addition. Ashley provides a nice foil to Erica Hale, Ben’s secret CIA crush, though Gibbs passes up the opportunity to really capitalize on the potential for a full-fledged, superspy love triangle.

It’s not a nail-biter, but it certainly is an entertaining battle between good and evil.