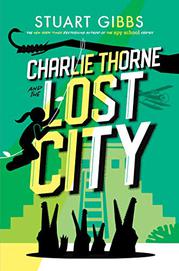 CHARLIE THORNE AND THE LOST CITY

From the Charlie Thorne series, volume 2

Hints left by Charles Darwin of a world-changing discovery send a 12-year-old supergenius deep into the Amazonian rainforest.

Holed up in the Galápagos Islands and hotly pursued by both the CIA and the KGB for knowing Einstein’s most deadly secret (see Charlie Thorne and the Last Equation, 2019), Charlie decodes a message about the “Greatest Treasure in Human History,” carved by Darwin almost two centuries ago on a tortoise’s plastron, and follows further coded clues first to Quito and then on into the Peruvian wilderness—with, eventually, no fewer than four sets of secret agents and treasure hunters in her wake. What might the “Greatest Treasure” be? Gibbs plays his cards close to his chest as he employs multiple point-of-view characters to spin out a chase through crowded city streets and teeming tropical forests, punctuated by big explosions and hails of gunfire, to a climactic flurry of lurid fatalities. Though—except for the paucity of high-tech gadgets and a refreshing centering of a highly competent girl hero—comparisons with the Alex Rider series are almost inevitable, the author’s fondness for overexplaining never lets the pace build up a compelling head of steam. Also, his multilingual, ethnically ambiguous protagonist is so much smarter and more competent than any of the grown-ups that none of the pickles she gets into are more than briefly suspenseful.

Will appeal to readers who appreciate action-oriented tales.