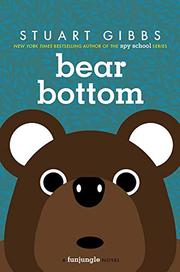 From the FunJungle series, volume 7

Leaving FunJungle Adventure Park for a vacation on a ranch in West Yellowstone, 13-year-old Teddy and his girlfriend, Summer, find themselves searching for missing bison while in the middle of solving a jewel heist.

The latest book in Gibbs’ FunJungle series leaves the adventure park for new territory. Even so, Teddy can’t seem to escape mysteries. While staying at the Oy Vey Corral, his skills as a teen detective are enlisted by the ranch owners to help find out who is stealing their purebred bison. When a grizzly bear named Sasquatch breaks into the ranch house late one night and Summer’s mother’s dazzling multimillion-dollar necklace goes missing, Teddy finds himself working not just one whodunit, but two. From an old hidden room for hiding bootleggers’ stashes to an abandoned gold mine and a bull on the loose, Gibbs keeps the pace moving and the action coming. While most of the main characters are presumed White, there is diversity in secondary characters. The owners of the Oy Vey Corral are Jewish. Gibbs doesn’t shy away from discussing America’s brutal treatment of Native peoples or the ways Americans have destroyed animal populations and habitats. This action-packed mystery with a satisfying resolution doesn’t rest on predictable thieves or obvious answers.

A thrilling, mystery-laden story with an incredible setting.