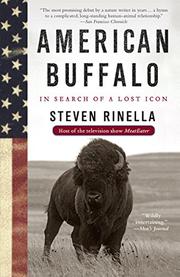 In Search of a Lost Icon

Hunter/conservationist and Outside correspondent Rinella (The Scavenger’s Guide to Haute Cuisine, 2006) chases the last of the wild buffalo, turning up a fine tale in the process.

Readers inclined to things robust and outdoors will probably enjoy a narrative that begins, “In the past week I’ve become something of a buffalo chip connoisseur.” Granted, it’s no “Call me Ishmael,” but Rinella has his own object of mysterious, somewhat inexplicable quest, having once found at high altitude—9,000 snowy feet—the remains of a bison that he decided, armed with sentiment more than science, was alive on July 4, 1776. Buffalo meat, the author proudly notes, is the “real original American meal,” a fitting repast for such a holiday, and the object of hunters from antiquity until the massive 19th-century kill-off of what General Phil Sheridan called “the Indians’ commissary.” (On that note, Rinella reproduces a photograph of a white hunter standing atop a 30-foot-tall heap of buffalo skulls, which certainly gives one pause to wonder.) Searching for the opportunity to recapitulate that primordial hunt in a new age, Rinella embarks upon a modest quest that takes him, for instance, to the gates of media mogul Ted Turner’s Montana ranch, where “for $4,285 (a $500 savings from last year’s prices) I could hunt a trophy-sized bull inside a fenced enclosure,” about par with the prices at other buffalo ranches. Allowing that there’s nothing particularly ennobling or romantic in gunning down a penned animal, Rinella finally obtains a lottery ticket to hunt in Alaska, yielding a resolution that most certainly will not please PETA cardholders but that conservationists will admire—even as Rinella wrestles with the question, “How can I claim to love the very thing that I worked so hard to kill?”

A fluently written celebration of life, punctuated, as always, by death. Worthy of a place alongside Doug Peacock’s Grizzly Years (1990), Jack Turner’s The Abstract Wild (1996) and other meditations on the red-in-tooth-and-claw side of nature.