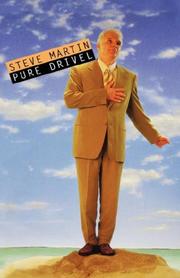 Martin (Cruel Shoes, 1979), star of stage and screen, and a guy once glimpsed with an arrow through his cranium, here toys with ink and paper.

With a gathering just shy of two-dozen little pieces, of which many originally appeared in the New Yorker, the comedian-actor-author offers commentary in the vein of his New Yorker forebears, S.J. Perelman, Robert Benchley and Woody Allen. He has improved since his Cruel Shoes, arrow-in-the-head days; if he hasn’t yet beaten those other worthies at their special game, Martin is at least a contender. He, like them, shows continuing evidence of linguistic hypomania—he’s more than a bit mad on punctuation, words, et cetera. Like Perelman, he’s also good at commentary on current and ephemeral events, like tripping up friends or relatives with clandestine recordings, or casting the roles of incumbent chief executive and first lady with Lucy and Ricky, or deconstructing a dumb remark by Marlon Brando. Especially sharp wit is brought to bear on the bicoastal drivel of showbiz luminaries, who babble of Prada leather pants in order to hide from the fans their real intellectual prowess. Certainly the Martin oeuvre is not uniform, never monotonous. True, there’s a piece about an eager dog with a setup that doesn’t support the punch line, for example, but even a belabored item about a mature Lolita can offer lines like, — —Lo-lee-tah,— she tongued. A column of sweat drained down the boy, and he entered puberty.” Three or so neat and nice pages even announce a shortage of periods in the Times Roman font—and the piece does indeed finally use just one of those very punctuation points.