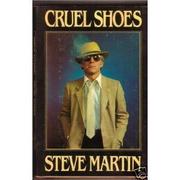 When it comes to humor, it's the printed page that separates the men—like Woody Allen—from the boys. . . like Steve Martin. Without the Martin stand-up persona to project them, these 50 or so mini-pieces mostly fall flat—and the lack of variety is numbing. Stories, poems, anecdotes, jokes; whatever the form, nearly all of these bits are based on a single comic notion: deadpan, mildly absurdist parody. So: "How to Fold Soup." Or pseudo-existentialist parables. Or: "Dr. Fitzbee's Lucky Astrology Diet." Or parodies of artsy poetry, pompous art criticism, or the literati—all of which have been done better before, often in college humor magazines. And, without Martin's sneakily subversive all-American demeanor (his only inspired joke), one can't make much of a selection that reads in entirety: "La la loo de doo. . . . Oh gawsh. . . . Hey, buddy. . . . Hey, cumon back. . . . la la la la. . . . Dime fa a cuwa coffa? Hey. . . . la la la." Budding comics may want to use this book to find out if they have what it takes to read these whimsies aloud in a way that makes them funny—and Martin's young fans, who don't understand what most of the jokes are about, will probably enjoy it most. (Their parents, however, may not be pleased with some of the stuff here that could never be heard on TV).