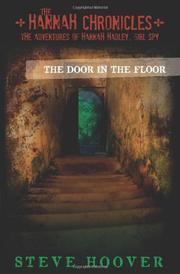 The Adventures of Hannah Hadley, Girl Spy: The Door in the Floor

Hannah Hadley is a young special agent who must thwart a clear and present danger to the United States in Hoover’s “smart is cool” young adult novel.

Hannah Hadley might seem like most 13-year-old girls. She enjoys painting, playing with her MP3 player and spending time with friends. But that’s where the similarities end. Hadley doubles as Agent 10-1, among the youngest spies drafted into the CIA’s Div Y department. She’s joined in her missions by her 10-pound Shih Tzu, Kiwi (with whom she communicates telepathically), and her best friend Tommie Claire, a blind girl with heightened senses. When duty calls, the group sneaks to a hidden command center located under the floor of Hadley’s art studio. Her current mission, aptly named “Operation Farmer Jones,” takes her to a secluded farmhouse in Canada. There, al-Qaida terrorists have gathered the necessary ingredients for a particularly devastating nuclear warhead that they intend to fire into America. The villains are joined by the Mad Madam of Mayhem, a physicist for hire whom the terrorists force to complete the weapon of mass destruction. With Charlie Higson’s Young James Bond series and the ongoing 39 Clues novellas, covert missions and secret plans are the plots of choice in much of today’s fiction for young readers, and references to the famed 007 stories abound in Hoover’s tale. But while the plot feels familiar, Hoover’s use of modern slang—albeit strained at times—and gadgets such as the iTouch appeal to today’s youth. Placing girls in adult situations has been a mainstay since Mildred Wirt Benson first introduced readers to Nancy Drew in The Secret of the Old Clock, but Hannah Hadley is like Nancy Drew on steroids. Both are athletic, score well in their studies and have a measure of popularity. Hadley, however, displays a genius-level intellect and near superhuman abilities in her efforts to roust the terrorists—handy skills for a young teen spy who just so happens to get the best grades in school.