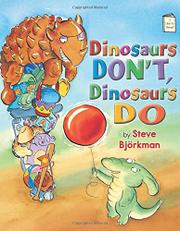 Illustrating his points with pairs of bright, informally drawn and colored cartoons featuring recognizable dinos in modern playgrounds and other familiar settings, Björkman contrasts bad manners with better ones. “Dinosaurs don’t eat like this. Dinosaurs eat like this.” (A marmalade T. Rex tosses syrupy pancakes into his mouth, spattering goo everywhere, while at the other end of the table, a hadrosaur politely offers the syrup to a pterodactyl; both have bite-sized pieces of pancake poised on forks.) “Dinosaurs don’t hit or bite. When they are mad, dinosaurs use words.” (That troublesome T. Rex pounds a purple, horned dinosaur, having already bitten off its tail; meanwhile, a green Dimetrodon mildly points out to an apologetic, brown Ankylosaurus that the latter broke his toy.) Summing up his message with a version of the Golden Rule (“Dinosaurs treat others as they want to be treated. That is why everyone loves dinosaurs!”) and steering clear of any direct or indirect reference to the possibility of punishment, the author leaves it to readers to make their choices on a moral or ethical basis. Though unlikely on its own to spark any revolutionary changes in behavior, this approach does at least provide a starting point for reflection or discussion.