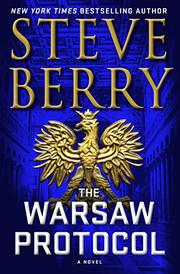 Holy relics, a salt mine, and treachery feature in this 15th entry in the author’s Cotton Malone series (The Malta Exchange, 2019, etc.).

Former lawyer and American intelligence officer Cotton Malone is now a bookseller who goes to Bruges, Belgium, for an antiquarian book fair. He’s hired by a former boss to steal the Holy Lance, one of the seven “weapons of Christ,” or Arma Christi. That is the price of admission to a secret auction, in which various countries will bid on compromising information about Poland’s president, Janusz Czajkowski. The point? Czajkowski is an honorable man who will not allow the U.S. to build a missile system on Polish soil, and the EU– and NATO-hating U.S. President Fox is one of several people who want the Polish leader out of the way at all costs. “If I wanted a conscience, I’d buy one,” Fox says. Readers will have to pay close attention to suss out the meaning of Czajkowski’s Warsaw Protocol because the author hardly hammers it home. But the story is fun regardless, especially with characters like the smart and resourceful Malone and the Polish foreign intelligence officer Sonia Draga, “a fortress, often scaled and assaulted, but never conquered.” The complex plot leads to a magnificent Polish salt mine (a real place) that’s hundreds of meters deep with nine layers, has hundreds of miles of tunnels, brine lakes people can’t sink in, and lots of tourists. Berry builds suspense nicely, allowing readers to anticipate the violence that eventually comes. To a great extent, the novel is a richly detailed homage to Poland, its culture, and its ability to survive so many invasions over the centuries. The connection between Arma Christi and an unwanted American missile system feels a wee bit iffy, but at least the latter won’t be called the Holy Lance.