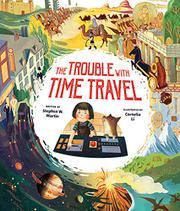 THE TROUBLE WITH TIME TRAVEL

Want to get back to the future? Better rectify the past—and fast!

One slip of the wrist, and the next thing Max knows her Frisbee has thoroughly smashed her 18th-century ancestor’s vase (the sole thing saved when the woman’s houseboat mysteriously sank). Facing the daunting prospect of fessing up, Max opts instead to rewrite the past by inventing a time-travel machine with the hope of pre-destroying the vase. But while time travel may be a science, it apparently isn’t an exact science, and Max finds herself to be the cause of the houseboat’s demise in the first place. At last she comes up with a new solution, but will her past self heed her future self’s warning? Although this is as nicely convoluted as any good time-travel yarn should be, older children should have no difficulty piecing together its coincidences and repercussions. What could have felt like a “Calvin and Hobbes” retread is instead fresh and new. Max’s path of destruction cuts through a swath of time, and it abounds in clever visual gags including the fates of the Sphinx’s nose and the Venus de Milo’s arms as well as the occasional futuristic robot uprising. Reds and blues suffuse the visual palette, and while Max, who presents white, and her hijinks read well, the eclectic, energetic art steals the show.

Rev up your flux capacitors, because the space-time continuum will never be the same again! (Picture book. 4-7)