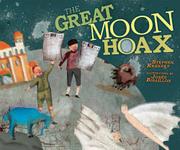 Krensky spins a wisp of history into a diaphanous tale that's accompanied by arty illustrations that fail to add substance or even a sense of period. Thanks to the popularity of an actual series of reported sightings of “man-bats,” intelligent beavers and other strange life forms on the Moon that ran in the tabloid New York Sun in 1833, fictional newsboys Jake and Charlie enjoy temporary prosperity—meaning they can buy meals, and sleep in a bed rather than an alley at night. Jake’s imagination is fired with the idea that words, “even if they’re not quite true, ... can make us see amazing things,” but the hope that the paper will continue to offer such sensationalistic “news” for them to peddle each day is plainly the sharper concern. Krensky concentrates on conveying the newsboys’ hand-to-mouth existence; the stories themselves and the unsurprising later revelation that they were a hoax draw only brief references and quotes in the narrative. These are supplemented by clipped fragments of illegible printing held by the crudely drawn, sometimes anachronistically dressed figures in Bisaillon’s scraped, mud-colored collages. Don Brown’s Kid Blink Beats the World (2004) brings the life of 19th-century newsboys into sharper focus, and when it comes to examining popular hoaxes, Meghan McCarthy’s Aliens Are Coming! (2006) sets the bar. (afterword) (Picture book. 8-10)