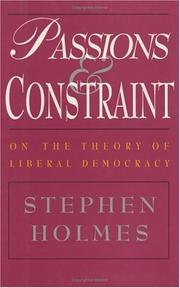 On the Theory of Liberal Democracy

A spirited vindication of classical liberalism and its notions of constitutional government. In a series of linked essays, Holmes (Political Science and Law/Univ. of Chicago; The Anatomy of Anti-Liberalism, not reviewed) takes on what he sees as wrongheaded criticisms, whether from the right or the left, of three aspects of liberal democracy: constitutional constraints on majority rule; the identification of individual freedom with an absence of government involvement in civil society; and self-interest. Holmes sees these principles as necessary both for popular self-rule and for the modern welfare state. Most tellingly, he takes sharp issue with negative constitutionalism—the idea that constitutions are designed to curb the power of the sovereign. This notion is true only up to a point, Holmes counters, arguing that, when legitimated by a constitution, sovereign or executive power often increases. Though Holmes touches on the point only lightly, he suggests that the reason some right- wingers so overestimated the Soviet threat to the West was that they failed to recognize that the contentious nature of democracy was not a weakness. ``It should now be clear, for good or ill,'' he notes, ``that liberalism is one of the most effective philosophies of state building ever contrived.'' What lends particular credibility to Holmes's argument is his examination of the historical context that gave rise to elements of liberal theory, including the English Civil War, which inspired Thomas Hobbes's notions of unruly man; the 15th-century conflict between French Catholics and Huguenots that led Jean Bodin to speculate on the nature of royal sovereignty; Thomas Jefferson and Thomas Paine's theories of bonds among the generations; and how liberal theory is tested in such contemporary applications as welfare and abortion. Despite some puzzling gaps (e.g., little discussion of the disruptive effects of race and ethnicity), an intelligent reminder that a system of government seen as weak can be unexpectedly strong.