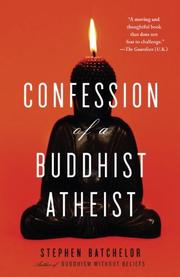 CONFESSION OF A BUDDHIST ATHEIST

Religious scholar and former monk Batchelor (Living with the Devil: A Meditation on Good and Evil, 2004, etc.) chronicles his four-decade journey through varieties of Buddhism.

The notion that a Buddhist can be an agnostic or atheist is not oxymoronic, of course. Buddhism requires no formal belief in a god or gods. It does, however, require other leaps of faith, including one that Batchelor admits to having had trouble grasping—namely, the acceptance of reincarnation, for “the entire edifice of traditional Buddhist thought stands or falls on the belief in rebirth.” The author arrives at his discussion of reincarnation through a hard tour of duty in a highly intellectual school of Tibetan Buddhism that prizes the study of formal logic and debate, providing tools for a rationally based, constantly inquiring approach to religion. As the Buddha said, “Just as a goldsmith assays gold, by rubbing, cutting, and burning…so should you examine my words. Do not accept them just out of faith in me.” Elsewhere Batchelor writes of his encounters with the Dalai Lama, who has been waging a quiet war against the Tibetan belief in evil spirits, but who has also long been engaged in schools of Tibetan Buddhist thought other than his own in a kind of ecumenical spirit. Batchelor provides smart commentary on various aspects of Buddhist belief of whatever school, including the well-known eightfold path guiding appropriate behavior, “a complex feedback loop that constantly needs to be renewed and restored.” Seekers of truths large and small, no matter what their inclinations, will find that commentary valuable, especially the author’s exhortation that belief is not enough—one also has to act and act in the right way.

A welcome contribution to Buddhist studies, joining essential modern books such as Rick Fields’s How the Swans Came to the Lake (1980) and Robert Aitken’s Taking the Path of Zen (1982).