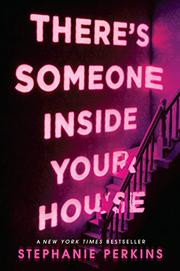 THERE'S SOMEONE INSIDE YOUR HOUSE

Someone is murdering high school students. Most freeze in fear, but a brave few try to stop the killings.

Senior Makani Young has been living in corn-obsessed Nebraska for just a little over a year. She has developed a crush and made some friends, but a dark secret keeps her from truly opening up to those around her. As the only half–African-American and half–Native Hawaiian student in her school, she already stands out, but as the killing spree continues, the press descends, and rumors fly, Makani is increasingly nervous that her past will be exposed. However, the charming and incredibly shy Ollie, a white boy with hot-pink hair, a lip ring, and wanderlust, provides an excellent distraction from the horror and fear. Graphic violence and bloody mayhem saturate this high-speed slasher story. And while Makani’s secret and the killer’s hidden identity might keep the pages turning, this is less a psychological thriller and more a study in gore. The intimacy and precision of the killer’s machinations hint at some grand psychological reveal, but lacking even basic jump-scares, this tale is high in yuck and low in fright. The tendency of the characters toward preachy inner monologues feels false.