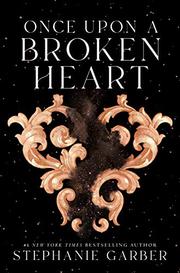 ONCE UPON A BROKEN HEART

From the Once Upon a Broken Heart series, volume 1

After praying to a Fate for help, Evangeline discovers the dangerous world of magic.

When her father passes away, Evangeline is left with her cold stepmother and kind but distant stepsister, Marisol. Despite inheriting a steady trust in magic, belief in her late mother’s homeland of the mystical North (where fantastical creatures live), and philosophy of hope for the future, her dreams are dashed when Luc, her love, pledges to marry Marisol instead. Evangeline desperately prays to the Prince of Hearts, a dangerous and fickle Fate famed for his heart that is waiting to be revived by his one true love—and his potentially lethal kisses. The bargain they strike sends her on a dark and magical journey throughout the land. The writing style fluctuates from clever and original to overly verbose and often confusing in its jumble of senses. While the pervasive magic and concept of the Fates as a religious system add interest, other fantasy elements are haphazardly incorporated without enough time devoted to building a cohesive world. However, the themes of love, the power of story, family influence, and holding onto belief are well rounded and add depth. The plot contains welcome surprises, and the large cast piques curiosity; readers will wish more time was spent getting to know them. Evangeline has rose-gold hair and, like other main characters, reads as White; there is diversity among the fantasy races in this world.

A lushly written story with an intriguing heart.