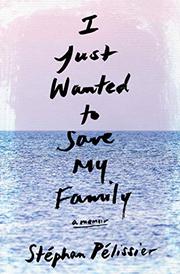 I JUST WANTED TO SAVE MY FAMILY

by Stéphan Pélissier with Cécile-Agnès Champart ; translated by Adriana Hunter

A French legal expert’s account of how efforts to rescue his Syrian refugee in-laws turned into a protracted legal and political nightmare.

Pélissier married his wife, Zena, in 2012, just as the conflict in her native Syria began to intensify. In 2013, while visiting her parents, the newlyweds discovered that war had forced them to move from the outskirts of Damascus to an area they believed was safer. Over the next two years, the family endured the kidnapping and imprisonment of Zena's father, the rejection of their application for asylum in France, and a grueling journey involving smugglers that took them to Greece and almost cost them their lives. Desperation forced the family to contemplate using human traffickers again to get them into Italy. Unwilling to allow his in-laws to experience further trauma, Pélissier went to Greece in 2015 to take them back to France with him, knowing that French law would allow him to do so without punishment. Greek officials arrested the author and forced him to return home while his in-laws were forced to again use smugglers to help them get to France. In the years that followed, Pélissier and his wife battled to keep her family in their town only to be told everyone—including Zena’s now-ill father—would be deported. In 2016, another town offered the family refugee status, but a year later, Pélissier became embroiled in a long, costly legal battle with the Greek government, which accused him of being a "human trafficker.” Both sobering and informative, this story of human suffering—which is told in both Pélissier’s voice and the voices of some of his relatives—calls necessary attention to the brokenness of democratic legal systems and their terrifying inability to effectively handle ongoing humanitarian emergencies like the Syrian refugee crisis.

Eye-opening reading for anyone interested in learning more about refugees and their plights.