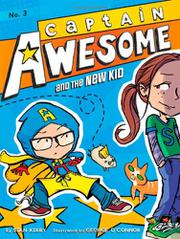 CAPTAIN AWESOME AND THE NEW KID

From the Captain Awesome series, volume 3

Seven Captain Awesome adventures are slated for release in 2012. In this, number three in the series, the Sunnyview Superhero Squad encounters several nemeses, rescues a lost cat and meets a potential super-buddy. Second-grader Eugene McGillicudy and his best friend Charlie Thomas Jones have secret identities: Inspired by their idol Super Dude, they are Captain Awesome and Nacho Cheese Man. Together with their hamster sidekick, Turbo, they patrol the streets of Sunnyview in costume to keep unsuspecting citizens safe from crime (but mostly just to have fun). They rescue their fantastic Frisbee from Mr. Drools, "the most slobberingest monster from the Howling Paw Nebula." They investigate the moving van down the street for alien spies. At school they defend a new girl from the cootie insults of Little Miss Stinky Pinky, aka Meredith Mooney, and avoid the evil peas of Dr. Yuck Spinach in the lunch room. Kirby and O'Connor’s ultra-illustrated early chapter book will be of interest to superhero fans graduating from easy readers, but they will need a high tolerance for super-lingo. Several chapters set up interesting events that are not played out in the text or comics-inspired, black-and-white illustrations, which is a disappointment.

For seekers of super-silly series sagas.