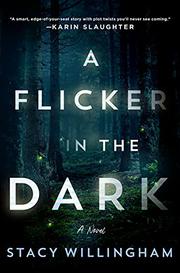 A FLICKER IN THE DARK

Twenty years after Chloe Davis’ father was convicted of killing half a dozen young women, someone seems to be celebrating the anniversary by extending the list.

No one in little Breaux Bridge, Louisiana, was left untouched by Richard Davis’ confession, least of all his family members. His wife, Mona, tried to kill herself and has been incapacitated ever since. His son, Cooper, became so suspicious that even now it’s hard for him to accept pharmaceutical salesman Daniel Briggs, whose sister, Sophie, also vanished 20 years ago, as Chloe’s fiance. And Chloe’s own nightmares, which lead her to rebuff New York Times reporter Aaron Jansen, who wants to interview her for an anniversary story, are redoubled when her newest psychiatric patient, Lacey Deckler, follows the path of high school student Aubrey Gravino by disappearing and then turning up dead. The good news is that Dick Davis, whom Chloe has had no contact with ever since he was imprisoned after his confession, obviously didn’t commit these new crimes. The bad news is that someone else did, someone who knows a great deal about the earlier cases, someone who could be very close to Chloe indeed. First-timer Willingham laces her first-person narrative with a stifling sense of victimhood that extends even to the survivors and a series of climactic revelations, at least some of which are guaranteed to surprise the most hard-bitten readers.

The story is sadly familiar, the treatment claustrophobically intense.