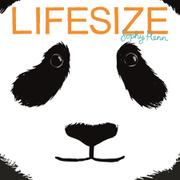 Like it or not, size matters, and Henn shows just how important size can be across 17 animal species found around the world.

The organization is scattershot, jumping from animal to animal, but readers and listeners may not mind this as they’re learning a bit about each creature discussed. Nearly every text block ends with an open-ended question or challenge: Can you flap your arms faster than a bee hummingbird’s 80 times per second? Whose tongue is longer, yours or a giraffe’s? Large spreads—each page is 12 inches square—allow this book to be easily seen from the back of the room. Though the book will easily create choruses of “awwww”s, it may also generate a few “uuuummmm”s, as the facts are brief. Readers learn, for instance, that the male rainbow lizard is normally brown but transforms into rainbow hues “to impress female lizards,” but they don’t learn how this happens. Backmatter consists of a relative-size chart of many (not all) of the animals discussed. All measurements are in English units only even though the metric system is the international standard. Henn’s illustrations, which appear to be digitally created, are bright, bold, and welcoming. Readers are greeted by an arrestingly large panda face and bamboo endpapers, but the only information about pandas is in the backmatter. Panda enthusiasts (and those who judge a book by its cover) will be greatly disappointed.