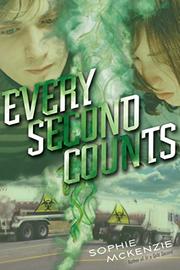 Two teens framed as terrorists need to save England from a terrorist attack and political takeover.

Charlie and Nat have been on the run since they were tricked into aiding a kidnapping and bombing (In a Split Second, 2015). Charlie, furious after the attack that killed her mother and left Nat's older brother in a coma, tried to do good by training as a soldier for the vigilante English Freedom Army. Nat and Charlie were told the EFA existed to fight terrorists like the racist League of Iron, but it turns out they were terrorists, fomenting chaos to support the political aspirations of charismatic politician Roman Riley. Now the teens, distracted by both their romance and Charlie's family secrets, must stop Riley from creating a far worse atrocity. Their single-minded focus on each other even as they learn of potentially horrific casualties can be read as either romantic or utterly lacking in empathy, but at least they prioritize the mission. Chapters that alternate their perspectives, most only about three pages, maintain endless urgency in the style of the television series 24. Though some lulls might have improved the flow, the nonstop action distracts from plot holes and flat secondary characters. U.S. readers may be bemused at the U.K. revolutionaries’ discussions of bombings but shock at the use of guns.

This breathless political thriller isn't always coherent, but it keeps the adrenaline pumping