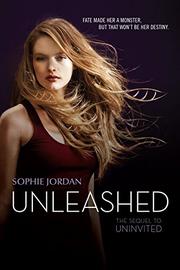 From the Uninvited series, volume 2

Davy’s escaped from the government camp of Uninvited (2014), but she’s on the run and still far from safe.

At a safe house, Davy and her fellow escaped Homicidal Tendency Syndrome carriers wait to cross the border to Mexico, where they’ll be out of reach of the U.S. government. But Davy can’t stop thinking of the man she shot at the government training school, under the threat of love interest Sean’s execution if she refused. Unable to separate thoughts of Sean from her victim, Davy’s romantic feelings wane. The group’s border crossing is a predictable disaster, and injured Davy is separated from her friends—but luckily rescued by a new handsome boy! Teenage resistance leader Caden brings her to a secret Resistance compound for treatment, and the plot dramatically slows. The HTS program’s history and its ongoing efforts are mainly told in epigraphs between chapters—press items, communication transcripts and the like—leaving the bulk of the text focused on the romantic storyline. Tiresome girl-on-girl hostility stemming from romantic rivalry runs rampant and motivates big decisions made by the female characters. The occasional action scenes are more compelling. The ending seems to conclude the story—well, the romantic story at least—but readers may feel let down by the scant resolution of the HTS storyline and how so much of it passes off the page entirely.

Only for romance fans.