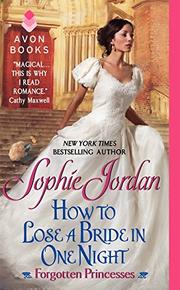 HOW TO LOSE A BRIDE IN ONE NIGHT

On her wedding night, Annalise is nearly murdered and then thrown from the couple’s honeymoon barge into the river; rescued by a war-wounded earl who nurses her back to health, she vows to never be vulnerable again.

Annalise should have known better than to believe the Duke of Bloodsworth could love her, despite his pretty promises and charming manner. After years on her own as a penniless orphan, her long-lost father may have found her, dressed her in pretty clothes and set to finding her a blue-blood husband, but she was still crippled, plain and of dubious origin. She should have known the duke couldn’t really want her. But still, to try to murder her, then throw her into the river like garbage is even more inconceivable. When she comes to after days of fever and touch-and-go health, she learns that she’s been rescued by an enigmatic man of few words, Owen, who found her on the riverbank and brought her to a gypsy healer then helped the gypsy nurse her back to health. Mortified by her husband’s absolute rejection and premeditated plans to murder her, she feigns amnesia, which Owen never completely believes. When she has healed enough to leave the gypsy camp, Owen takes her to his London townhouse, where she discovers he’s an earl. She’s attracted to his gruff kindness and his ability to make her feel safe, even though he makes it clear he doesn’t want her around and that bringing her to his home was a mistake. As events unfold, Owen and Annalise will have to be honest with themselves and each other in order to find a healing, sustaining love that can save them from internal and external hazards. Well-written and engaging, despite a few too many “come-hither-no-stop-right-there” situations and some repetitive internal character dithering that becomes more irritating as the story moves forward.

An emotionally touching story in which two damaged souls heal and find their happy-ever-after in satisfying ways.