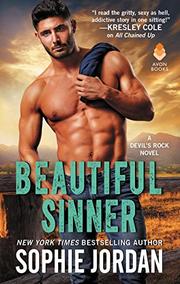 In the fifth book in the Devil’s Rock series, a journalist is trapped in a closet with her high school crush—an ex-felon.

Years ago, Cruz Walsh went to prison to protect his sister. Now he’s back home in Sweet Hill, exonerated of his crime. Gabriella Rossi has never forgotten the steamy kiss Cruz once gave her in a dark corner of a boathouse, thinking she was someone else. But innocent or not, a man who once confessed to murdering her cousin isn’t the kind of man she thinks she should bring home. Nor can she flirt with Cruz if she hopes to interview him for the Austin Daily Reporter, where her jerk of a boss is also her ex-boyfriend. Besides, Cruz is too physically fit to be interested in a girl whose nickname in high school was “Flabby Gabby.” But when she and Cruz are accidentally trapped together in the custodian’s closet at their old school, Cruz makes another shocking confession: He’s had feelings for Gabriella all along. Between Gabriella’s trash-talking family members and town pests with camera phones, Cruz’s prison cell proves to be much easier to escape than his bad reputation. But as he patiently pursues the woman he loves, the beautiful sinner proves himself to be a saint. And Jordan (Beautiful Lawman, 2017, etc.) makes a strong case for body positivity when Cruz convinces Gabriella—with artful dirty talk—to leave the lights on as they make up for lost time.

The would-be high school sweethearts prove that being locked up is much hotter when you’re with the one you love—a bold and lusty installment in the series.